I’ve spent a little bit of time combing through research papers about social media, mostly by using Google Scholar. I didn’t have a particular goal in mind when setting out on this exploration, but I was primarily interested in the links between social media usage and mental health, as well as the analysis of social media addiction (how prevalent it is, its forms, patterns that differ among cultures and are common along cultural lines, etc). As the introduction of mobile phones and social media have essentially changed the way we communicate, research into analyzing its effects on people is in no short supply.

Much of the research that I have seen involves survey-experiments combined with statistical inference, and a few papers attempt to characterize social media addiction with respect to existing frameworks for classifying addictive disorders. Social media addiction is not its own mental disorder in the most recent 5th edition of the Diagnostic and Statistical Manual of Mental Disorders, although it does recognize Internet Gaming Disorder. The paper van den Eijnden et. al. (2016) (full text) posits that both its own “Social Media Disorder” and Internet Gaming Disorder are part of the same family of “Internet addiction.”

The conclusions in that paper suggest that indeed, social media disorder is a thing. It’s then of interest to predict what traits could cause or at least predict the onset/presence of the disorder when assessing a person. In the paper Blackwell et. al. (2017) (link, paywalled unfortunately), the authors conduct a study testing the correlation between problematic social media use and any of a number of personality traits including extraversion, neuroticism, attachment style, and fear of missing out (FOMO). Perhaps surprisingly, the only one of those traits that served as an effective predictor for social media addiction was FOMO! Anxious and avoidant attachment styles also were good predictors but were insignificant when also considering FOMO.

A lot of culture thinkpieces that I’ve read before have referenced the phenomenon and mood that is “fear of missing out”. Seeing the words could remind one of every time they weren’t invited to a good party, or on the flipside they can remind one of going to endless engagements just for the possibility that something truly exciting is going to happen, only to be disappointed. As I’ve mostly been exposed to the concept through opinion pieces, I thought it was a rather nebulous concept, so I was surprised to hear that it was used as a predictor in a completely technical psychological analysis. It turns out that FOMO is quite formally defined here with reference to another study that examined the phenomenon.

Przybylski et. al. (paywalled link) (you can find the full PDF online if you Google it, but the link isn’t permanent) “create[d] and evaluate[d] a self-report measure of Fear of Missing Out”, assessing the degree to which a person experiences FOMO with an assessment questionnaire. This questionnaire, originally drafted as 32 items but whittled down to 10 in the final version, was tested on a wide sample (there were three studies done in total with \( n \) values of 1013, 2079, and 87), and validated using a metric known as internal consistency.

Here’s the questionnaire complete with a scoring system: 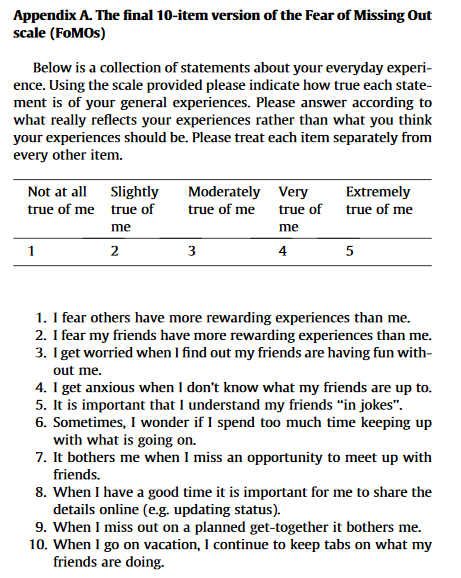 There’s a certain sense of conciseness that I get from the questions here. Each question seems to describe a wide array of a person’s possible thought patterns in very few words; perhaps that’s the power of distillation through rigorous testing. I suspect it resonates with me so much because I personally scored quite high on the scale, between 40 and 50. That also seemed to be a good predictor for my own social media use; even though I don’t consider even my worst usage of social media as problematically addictive as per the van den Eijnden paper, social media usage is something that I felt I had to actively manage in order to prevent myself from getting stuck on the couch, scrolling.

Overall, I doubt that I’ve done more than scratch the surface when it comes to understanding the research that’s been done on social media addiction. Furthermore, I’ve definitely not found any silver bullets here for managing social media usage. I do feel that this exploration has led to a better understanding of myself, though, and by looking at the problem through the lens of FOMO could make it easier to begin conceiving possible solutions. For example, it might be worthwhile to find other outlets to satisfy or quell the FOMO-brain that don’t get a person stuck in a loop doing one activity with no end. Or we can try to modify the UX of the social media sites we use in a way that make them just as satisfying to use without them being as addictive, using alternative clients or browser extensions or what have you.

I’ve found this to be a fantastic starting point and I’m interested in hearing more. I’ve managed to enable comments on the site for the first time, so I’d like to hear about what you think regarding the above. Have you thought of your own idea for a solution? What are your experiences with FOMO and social media use? And what score did you get on the questionnaire above? I’m very interested in hearing about it so feel free to comment at will.